You are here: Home / News / Graham: ‘I’m going to campaign the way I would govern’ 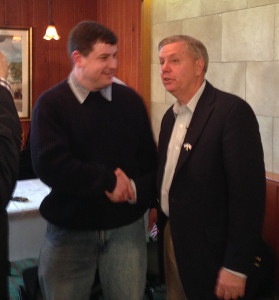 South Carolina Senator Lindsey Graham — a likely Republican presidential candidate — made a two-day swing through the state this weekend.

“Is every meeting like this, where you have like 400 cameras?” Graham joked to a crowd gathered Friday night in the banquet room of an Italian restaurant in Des Moines.

About 60 people were in the room, along with a small contingent of media. Graham spoke briefly of his own background before addressing looming issues, like the solvency of Social Security and Medicare. Graham didn’t back down when a woman in the room said cuts elsewhere in the federal budget were the answer.

“Please get this. All the checks you’re going to write in taxes by 2042 go to pay two things the federal government is in charge of — not the Department of Defense, not the EPA, not the Department of Education — to pay the Medicare and the Social Security bill. That is a fact. Please don’t be misled,” Graham said. “You’re a nice lady. I don’t want you to leave this room thinking there is a way to fix this without means testing benefits and adjusting the age of retirement.”

Graham said with his own congressional pension along with his military pension, “it’s not fair” to ask younger workers to pay more taxes to support all he’s been promised in future Social Security and Medicare benefits. Graham, who has been in the Air Force for 33 years, also argued for a continued U.S. presence in Iraq and Afghanistan.

“Every time a girl goes to school, that’s like dropping a bomb on the Taliban, so here’s what I tell people in my party: Getting to the left of Barack Obama is not the answer to the world’s problems,” Graham said, getting head nods and audible “uh huhs” from the crowd. “Getting to the left of him in terms of leading from behind only creates more chaos.”

That was a direct shot at Kentucky Senator Rand Paul, who will formally enter the presidential race April 7. Paul and Graham, along with the other likely candidates Texas Senator Ted Cruz and Florida Senator Marco Rubio, had a battle in the senate late last week over defense spending. Paul criticized the other three for supporting what he called a “reckless” and “irresponsible” increase in defense spending without making corresponding budget cuts elsewhere. Graham laughed about the competition when a reporter in Iowa asked about it.

“Everybody is trying to outdo this and outdo that,” Graham said. “So, yeah, we’ll be using our day jobs to try position this and try to position that and I’m trying not to tell people in Iowa something I can’t do.”

During his remarks to the crowd, Graham warned he would seek to suspend U.S. support of the United Nations if the deal the Obama Administration is trying to negotiate with Iran goes to the U.N. rather than congress for a vote. Graham’s goal is to ensure “radical Islam” doesn’t get to “marry up” with nuclear capabilities.

“This decision about the Iranian nuclear program is going to be the most important decision in your lifetime and my legislation will require it to come to congress before he can lift congressional sanctions and we will look at that deal, we will debate that deal, we will vote on that deal and you will know what’s in that deal,” Graham said, to applause.

On Saturday, Graham held a town hall meeting in Coralville and attended a regional meeting of GOP activists in Fairfield, but Graham is making it clear Republicans must find a way to work with Democrats to resolve the country’s toughest problems.

“I’m going to campaign the way I would govern and I don’t see how you can solve America’s problems without some level of bipartisanship,” Graham said. “It’s o.k. to fight. I like a fight, but you know at the end of the day, all we do is fight. Somebody’s got to step up and solve a problem and I’m going to offer myself to be that somebody.”

Graham plans to make a formal announcement about his White House intentions in May.