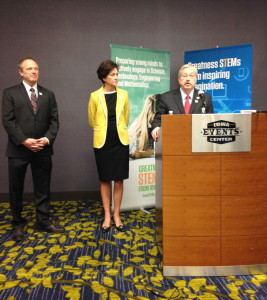 Nearly 600 people are in Des Moines today for a summit to talk about how to promote science, technology, engineering and math — the so-called STEM courses.

“This is the future of Iowa that assembles in that room,” said Jeff Weld, executive director of the Iowa STEM Advisory Council and a main organizer of today’s conference. “These are the educators, the business leaders, government officials, non-profit heads who hold Iowa’s economic future in their hands. They have the children of Iowa in their classrooms, in their hallways, in their partnerships and in their clubs.”

Summit participants can get virtual tours of STEM classrooms in Sioux Center and Davenport West high schools and hear how to redesign courses as well as the classroom itself to get students more actively engaged in problem solving.

“STEM’s about expanding opportunities for all and I am seeing it every day. STEM’s changing lives,” said Lieutenant Governor Kim Reynolds, co-chair of the Iowa STEM Advisory Council. “We only have to look at what’s happening throughout Iowa to see that that’s absolutely true.”

Reynolds pointed to this past weekend’s regional FIRST Tech Challenge in Des Moines, with teams from 14 states, including Iowa. Teams from schools in Marion, Denver, Oskaloosa and Davenport are headed to the FIRST Tech world competition in St. Louis.