You are here: Home / News / Comment period coming to a close on topsoil replacement rule 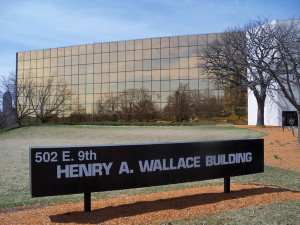 The final public hearing on the topsoil rule was held in Des Moines.

The public comment period for the proposed change in a controversial rule dealing with the amount of topsoil developers are required to return to a construction site will end Wednesday.

The Iowa DNR held its last public hearing on the issue Friday in Des Moines. Chip Classon of Jerry’s Homes spoke out in favor of the change. “One of the things that I continually hear is that homebuilders and developers just don’t care about the environment. We’re not regulated, and we do whatever it takes just to make a buck. That’s simply not true,” Classon says.

Classon went on to describe pages and pages of regulations and steps that are required of builder sand developers. “We are spending thousands of dollars on environmental control even before this four-inch requirement comes into play,” Classon says. “Contrary to what many of you would believe, we respread all the topsoil stockpiled for construction on our plats. And the only soil exported is from the basement excavation.”

He says the four-inch requirement that was instituted in 2013 has added thousands of dollars to the cost of building a home. “The cities know what we’re doing, they know where we are putting our soils. And this absolute four-inch, highly-regulated measurement does not make fiscal or regulatory sense,” Classon says. A developer in the Des Moines area said it is an urban myth that developers take topsoil from build sites and re-sell it.

Mark Watkins works for McAnich, an earth moving company. “Having a specification that was written by the federal government enhanced and made more stringent by the state of Iowa is very troublesome. Adding any dimension to the thickness of topsoil being place on land disturbed by construction activities causes multiple expenses to the cost of the development of the land,” according to Watkins.

Watkins says his company stores topsoil and puts it back on construction sites unless there is a parking lot or large building covering the area and the topsoil is not needed. “Adding to the cost of construction by demanding precise measurement of topsoil thickness — which is in fact beyond the intent of the federal law — is a waste of financial resources for both the construction industry and the government agencies that have to enforce the rules, “Watkins says. “This money could be put to far better use in the communities, rather than wasting it to try to regulate a certain depth of topsoil.”

Carolyn Walker spoke on the other side of the issue, representing herself and the Sierra Club. “I was a homeowner who had to deal with a developer who did not put the four-inch topsoil back. This was in Urbandale in the 1980s,” she explained. “I found out quickly that the soil was clay, it was hard, it was compact. It was difficult to have the garden like I wanted. It was very difficult to grow the bushes and the trees that I tried to plant.”

Walker also expressed concerns about the impact of runoff without a certain amount of topsoil around homes. “Heavy rainfall won’t be absorbed into the hard, compact-clay soil. More and more cities and towns are having stormwater problems in Iowa,” Walker says.

Susan Heathcote spoke on behalf of the Iowa Environmental Council. “I am here to express the council’s support for keeping in place the existing four-inch topsoil preservation rule, which aids in the infiltration of stormwater runoff, and reduces polluted runoff and the risk of flooding,” Heathcote says. She expressed the same concern as Walker that rainfalls have become more frequent and heavy, leading to even more need for the topsoil.

“Runoff is made worse when lawns do not have an adequate layer of topsoil that can absorb and hold water and instead are underlain compacted clay that acts more like a sheet of concrete than good Iowa soil,” Heathcote says. Heathcote says it is better to have the cost of putting the topsoil back on the site paid now instead of later. “While compliance with this rule may increase the purchase price of new homes, we believe those costs will be more than made up for during the life of the property,” according to Heathcote. “I would encourage you to note the number of Iowans who submitted comments to the stakeholder group complaining about extra costs for irrigation, fertilizer and soil amendments they disappointedly discovered were necessary to make their lawns grow.”

The public hearing at the Wallace Building in Des Moines was the third and final one on the issue. A spokesman with the DNR says all the comments will be used in the Environment Protection Commission’s decision on the change.