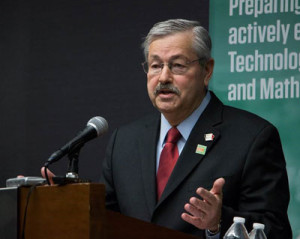 Governor Terry Branstad says there’s no reason to add an accommodations for year-round high schools in the bill that would resolve the controversy about when Iowa schools may start classes this fall.

“We don’t have any year-round high schools in Iowa, so there’s not something that we need to address,” Branstad says.

Both the Iowa House and Senate have approved bills that would let schools start “on or after August 23.” A December memo from the Branstad administration put schools on notice that it would no longer grant waivers and enforce existing law, which means schools would have to start during the week in which September 1 falls.

“I can live with the present law or this compromise is something that I would find also acceptable,” Branstad says.

The Democratic leader in the Iowa Senate has placed a hold on the compromise date of no earlier than August 23. Senate Democratic Leader Mike Gronstal has said since the bill grants a waiver to year-round elementary schools, it should include waviers for year-round high schools, in case districts want to move in that direction in the future. Branstad rejects that argument.

“I see no reason to address something that’s a non-issue when there are no year-round high schools,” Branstad says. “I can’t see what his problem could be.”

In addition to resolving the dilemma about when Iowa schools can start classes in the fall, lawmakers have also failed to decide how much state aid districts will get for 2015-2016 school year. Branstad told reporters this morning during his weekly news conference that he’s sticking with his bargaining position, which would provide about $100 million to schools. Democrats in the legislature are holding to their bargaining position, a four percent boost in per pupil spending that would amount to a roughly $200 million increase for public K-12 schools.