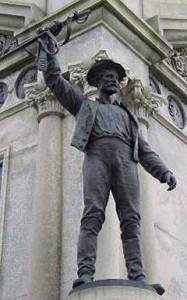 Next month will mark the 150th anniversary of the end of the Civil War and an expert on the subject says Iowans played a crucial role in the four-year-long conflict that ultimately abolished slavery. John Liepa taught U.S. History at Des Moines Area Community College for 38 years. He says roughly 78,000 Iowans fought in Civil War and 13,000 died.

“Most of those Iowans took part in some of the key battles and some of these were absolutely pivotal during the war,” Liepa said. “If you look at battles like Shiloh, in 1862, Iowa and Illinois farm kids played a tremendous role in the Union victory there.”

“And then Vicksburg was a critical battle because it was basically a battle over the control of the Mississippi River and that was an important part of Abraham Lincoln’s overall strategy for Union victory. Iowans played a major role in that victory,” Liepa said.

A group of Civil War history buffs in Iowa, including Liepa, will be gathering this Saturday (April 4) to commemorate the 150th anniversary of the end of the Civil War. The event will be held at the State Historical Building in Des Moines. The scheduled keynote speaker is Michael Kauffman, who has spent decades studying the life of John Wilkes Booth, the man who assassinated President Abraham Lincoln.