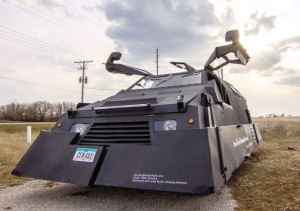 A storm-chasing team from Iowa has provided live video of some major storms in other states, including the twin tornadoes that devastated a small town in northeast Nebraska last year.

Ben McMillan is a member of the Iowa Storm Chasing Network, which live-streamed the video that was picked up by local television and national networks.

“Our area of focus is mainly Iowa and the surrounding states so we try to prepare the best we can to be out in our home region, so we’re ready when that time comes,” McMillan says. “Until then, we’re going to be out here doing awareness and outreach, spreading the message of preparedness.” That message includes telling all Iowans to have a plan for your family and know where to go when dangerous weather strikes.

McMillan’s team was witness to history last year, when twin tornadoes moved through the Nebraska towns of Stanton and Pilge. “The double tornadoes outside of Pilger this last year was something we’ve never seen before, ever, as storm chasers,” McMillan says. “That was definitely memorable from a scientific standpoint to see those two violent vortices side-by-side and it’s going to be interesting to see over the next few years what research is done on that event and to see if it could happen again.”

Although the team focuses on chasing severe weather in Iowa and neighboring states, McMillan says the team was in the Moore, Oklahoma, area when a deadly tornado struck in 2013. He called it “devastating” to see elementary schools wiped out there and says he hopes to never see something like that again. The team’s new tornado hunt vehicle is dubbed “Dorothy,” a steel-plated tank, of sorts, with polycarbonate windows. Dorothy was shown off at a severe weather workshop in eastern Nebraska over the weekend.

Brennan Jontz says Dorothy began as an E-350 cargo van that they stripped to the dashboard and engine and rebuilt from the ground up. “The goal with the vehicle is not to technically go in the tornadoes but to get near them safer,” Jontz says. “We have a flap system that goes down on each side of the vehicle to prevent wind from getting underneath the vehicle and lifting it. When you put the hydraulics down, the flaps actually lift the frame of the vehicle and it gets rid of the suspension plan and it’s rock solid.”

The vehicle weighs just under 10-thousand pounds, about four times the weight of a typical mid-sized sedan. The Iowa Storm Chase Network recently partnered with KCCI-TV, the CBS affiliate in Des Moines, to provide live-streamed video of tornadoes during chase events.