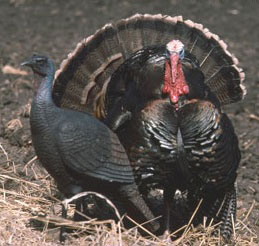 Turkey hunting season starts next weekend (April 4th) for youth in Iowa and the season opens on April 13th for adults. Jim Coffee, a forest wildlife research technician with the Iowa Department of Natural Resources, based in Chariton, says last year’s turkey season was tremendously popular.

“We had about 50,000 people that went out in the woods to hear that spring gobble and over 11,000 of them were successful,” Coffee says. “That’s a pretty good success rate, when you look at the wariness of a species like this.” Coffee offers a few tips for Iowa turkey hunters.

“The biggest thing is to be prepared which begins a lot with the mental aspect of getting ourselves up early, thinking about things, always making sure your weapon is in good shape,” Coffee says. “I always emphasize understanding the biology of the bird. If we understand that animal, what it wants to do and when it wants to do it, it helps increase our success rate.” Hunters from all over will be in Iowa, trying to bag a turkey.

“We’ve got a great reputation for having big, healthy birds in Iowa,” Coffee says. “We’re going to have a lot of people, obviously, from the state of Iowa hunting but we draw from a lot of other states. Some years, we have as many as 38 other states represented in the hunting population out there.” Turkeys are found in all 99 Iowa counties and they like to forage in forests, agricultural lands and pasture lands. There is a new application for smartphone users that will be helpful for hunters called the DNR Atlas.

“Open it up and it’s an aerial photograph of the entire state that you can zoom right down to literally see a tree that you want to sit underneath of, as well as all of the public lands available in every county,” Coffee says, “and do a lot of scouting right from your chair.” Find more information about turkey hunting season at www.iowadnr.gov.