You are here: Home / News / ‘This is no April Fool’s deal,’ Branstad says before signing sledding bill into law 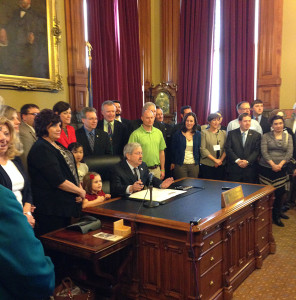 Governor Branstad held a ceremony in his formal office this afternoon to sign legislation that will provide some liability protection to cities that allow sledding on city-owned property.

“I know the people in Dubuque were very concerned about this bill,” Branstad said. “I know that the people in Boone and many other communities across the state had concerns about this and did not obviously want the liability, but wanted young people to have the benefit of having these recreational opportunities continue on municipal property.”

A large crowd of onlookers gathered to watch Branstad sign the bill into law.

“I’m glad to see sledding is so popular,” Branstad said, as the crowd laughed. “You may know I had my experience sledding a few years ago.”

Branstad’s jaw was broken in a 1993 sledding accident on a golf course run by the City of Des Moines. The City of Boone was sued after a sledder on a city golf course struck a concrete barrier was severely injured in 2008. A few months ago the City of Dubuque banned sledding on most city-owned property because of liability concerns.

Cities can still be held liability for gross negligence, but the new law will give not only cities, but counties and even school districts broad liability protection if “recreational activities” are allowed on government property. Branstad said it means more schools may open their gyms and running tracks for community use.

“It clarifies the law,” Branstad said just before he signed the bill and then, after he’s completed the process of using multiple pens to put his signature on the official copy of the bill, Branstad quipped: “This is no April Fool’s deal.”

The bill cleared the Iowa House and Senate without a dissenting vote. It takes out a list of activities in Iowa law, like bicycling and canoeing, and replaces that list with the phrase “recreational activities” so cities, counties — even school districts — will be able to be shielded from lawsuits from those who may get injured while engaging in recreational exploits on government-owned property.

Representative Chuck Isenhart of Dubuque was among the legislators who attended today’s bill signing ceremony. He does not fault his city for taking steps to evaluate areas on city property where sledders had been congregating and establish restrictions for this winter, but he told reporters there may be time between now and next sledding season to re-evaluate.

“Luckily we have, hopefully, about six to nine months of no snow and they’ll be able to go through a more deliberative process,” Isenhart said. “And I think had they started the process earlier last time they would have been able to do their inspections of the parks and take so many off (the ‘open to sledding’ list) and it wouldn’t have created such a stir.”

Senate President Pam Jochum, who is also from Dubuque, said the bill clarifies for nervous city and school officials just what “inherent risk” means when it comes to sports and other recreational activities.

“So that all government bodies understand what you will and will not be held liable for,” Jochum told reporters.