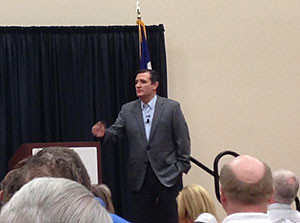 Republican presidential candidate Ted Cruz wrapped up a two-day campaign swing through Iowa with a speech tonight in Des Moines and a warning about the agreement the Obama Administration appears headed toward making with Iran.

“We’re still looking at what the exact details are of the deal,” Cruz said. “But everything that’s been announced so far suggests that this deal will dramatically undermine the national security of the United States.”

President Obama earlier today said the framework negotiators from seven countries developed after months of negotiations “would cut off every pathway that Iran could take to develop a nuclear weapon.” Cruz tonight said Iran is run by “religious zealots who embrace death and suicide” and they cannot be trusted.

“I think the fundamental problem is this administration does not understand the people with whom they are dealing,” Cruz said.

Cruz, a Texas Senator, got applause and cheers from the crowd when he pledged to urge his fellow senators to “stand up and reject” the deal. Jim Anderson of Des Moines was the man in the crowd who asked Cruz the question about Iran.

“I thought his answer was spot on,” Anderson said. “I virtually think I’m talking to the next president of the United States. He’s never flip-flopped on anything, says exactly what he means, does exactly what he says he’s going to do.”

After posing for photos and shaking hands with Anderson and others in the crowd for more than 20 minutes, Cruz answered a few questions from reporters and warned the U.S. may be pushed into a military confrontation with Iran.

“If the international coalition in favor of sanctions has been dissolved by President Obama and the new president faces Iran on the verge of acquiring nuclear weapons, then President Obama may have effectively taken sanctions off the table for the new president because it will take months, if not years, to reassemble that international coalition and put sanctions back in place,” Cruz said. “And if that’s the case, it could well mean that the only option a new president has in 2017 to prevent Iran from acquiring nuclear weapons is a direct use of military force.”

Cruz became the first candidate to officially enter the presidential race nine days ago. He will return to Iowa next week to speak at a statewide meeting of home schooling families.