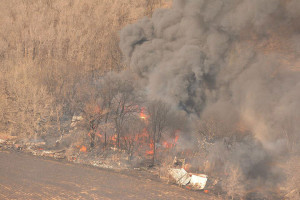 No one was injured as a home near Sioux City was destroyed by a grass fire.

“The homeowner at 2711 52nd Street was charged, issued a citation. I want to state that there was no indication of malicious intent whatever — this homeowner was burning some garden waste,” Everett says.

The owners of the home Waylan and Susan Zimmerman operated an exotic bird business on the property and most of the birds died in the fire.

Everett says there should not have been any burning at the time. “You have to have a burn permit to burn in Sioux City, and when conditions are the way they are, we don’t issue those permits. There was a burn ban,” Everett says. “It is very hard to control these kinds of fires. Embers can literally travel for blocks before they land somewhere and start fires in completely separate areas.”

Everett says the fire crews responded quickly, but the fire still burned 31.5 acres. Assistant fire chief, Pat Flynn, says the location of the fire made things more difficult as the nearest water hydrant was several blocks away. They couldn’t hook up to the hydrant with a hose and had to truck water in. He says they called right away and had 4 tankers from the city, 2 from Hinton and one from the Iowa Air Guard. “But the problem is, you can’t get it there quick enough,” Flynn says.

The Zimmermans also had several vehicles and tires on the property and they created a thick black smoke as they burned. No one was injured in the fire.