You are here: Home / Fires/Accidents/Disasters / Rain not enough to end concern over grass fires 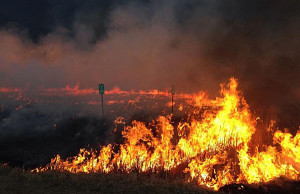 One firefighter was injured fighting this grass fire near Spirit Lake.

It’s been a busy week for firefighters across much of the state as dry and windy conditions have fueled grass and field fires. The fires have been especially severe in northwest Iowa.

Spirit Lake Fire Chief Patrick Daly says crews from eight area fire departments were on the scene of a large grass fire for about five hours Wednesday evening east of Spirit Lake. “That was a really fast moving fire and we just had a real hard time stopping it,” Daly said.

One firefighter was injured and a number of outbuildings were taken down in the fire. Much of the state received rain yesterday and early this morning, but it did little to alleviate the dangerously dry conditions.

“We didn’t get a whole lot of rain out of that deal and everything is really dry,” Daly said. Another grass fire yesterday near Dickens in Clay County kept crews busy for nearly nine hours. As many as 20 other wildfires were reported across three northwest Iowa counties on Tuesday. One of those fires near Sioux City destroyed a house, which also contained an exotic bird store.