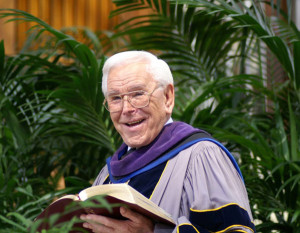 The Reverend Robert H. Schuller, who grew up in northwest Iowa, has died at the age of 88. Schuller gained worldwide fame through his “Hour of Power” television show broadcast from the massive Crystal Cathedral in Garden Grove, California.

In an interview several years ago with the Archive of American Television, Schuller discussed his childhood — he was born in 1926 near Alton, Iowa. “I was born in a little house at the dead end of a dirt road that had no name and no number. And you can go anywhere from nowhere,” Schuller said. He was the youngest of four children.

“We were part of a Dutch colony in Sioux County, northwest Iowa, and the entire county was made up of Dutch people,” Schuller recalled. “I got the impression that the whole world was the world I knew — people all went to church on Sunday and everybody respected the name Jesus Christ.” Schuller and his wife, Arvella, both grew up in northwest Iowa. They spent time at a church in suburban Chicago before moving to Orange County, California in 1955.

By the 1970s, Schuller had the most-watched religious show on television and in 1980, he opened the $17 million Crystal Cathedral. Schuller said he was only five years old when his uncle, a Princeton grad and a missionary to China, returned to Iowa and told Schuller he would grow up to be a preacher. “I didn’t have any problem with that, he was a hero in our home. To have somebody from an Iowa farm home who would go to Princeton, a prestigious university and seminary, and then go to China…he was a hero,” Schuller said.

His uncle advised the young Schuller that it would take him 20 years to reach his goal of becoming a preacher. “When I look back on it, that was very important because at a tender age, I set a 20 year goal. So, I’ve never been afraid of setting long goals. When I finally graduated from college and seminary, I had a goal to build a kind of church that would really impact the world,” Schuller said. In the last decade, the Crystal Cathedral ministry fell on hard times. Reverend Schuller retired in 2006 and the church filed for bankruptcy in 2010.

Robert Schuller died today from esophageal cancer at a care facility in California.