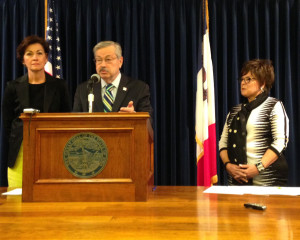 Lieutenant Governor Kim Reynolds is leading a 15-person trade delegation to Brazil at the end of this month.

“Brazil is Iowa’s fifth largest export market with over $500 million worth of manufactured and value-added goods exported in 2014,” Reynolds says. “Brazil also has the largest economy in Latin America and the world’s fifth largest population with 240 million people.”

Reynolds will visit Brazil’s wealthiest region, in the southeastern part of the country. The Iowans will also attend one of the world’s largest agricultural technology trade shows while they’re in Brazil.

Iowa Economic Development Authority director Debi Durham went to Brazil in 2012 on a trade mission with Governor Branstad. “Exporting is an integral part of our growth strategy,” Durham says. “According to the Business Roundtable, more than one in five Iowa jobs depend on international trade.”

Durham will not be going with Reynolds on the trade mission to Brazil, but she will accompany Governor Terry Branstad on a trade trip to South Korea in September.

“Having both our government and lieutenant governor lead trade delegations opens doors,” Durham says, “for the state and the mission delegates that might otherwise be closed or simply unavailable.”

Reynolds and the Iowa delegation are scheduled to leave for Brazil on April 25 and return May 2. According to state officials, over 51,000 Iowans work for foreign-owned companies and about 448,000 jobs in Iowa support exports. In 2014 Iowa exported over $15 billion in manufactured goods and “value-added” products.