You are here: Home / Health / Medicine / ‘The buck stops with me,’ Branstad says, so MHI closures imminent (AUDIO) 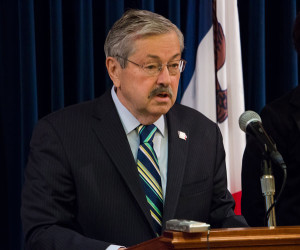 Governor Terry Branstad says he has broad authority to close state institutions without legislative approval — and he does not intend to delay the shut down of the Mental Health Institutes in Clarinda and Mount Pleasant where layoffs are beginning this week.

“I’m the chief executive,” Branstad told reporters this morning. “I was elected by the people of the Iowa to reduce the size and cost of government and to make it more efficient and to modernize it and to provide better services for the people of Iowa and we have been moving in that direction from the day that I took office.”

Last year Branstad ordered the Iowa Juvenile Home be closed and while legislators complained, they were unable to stop the process. This year the Senate has passed a bill that called on Branstad to keep the Clarinda and Mount Pleasant Mental Health Institutes open and accept patients through June 30. Another senate bill that passed on a bipartisan vote called for keeping the MHIs open until a plan was in place to ensure there’s care somewhere for the most severely mentally ill Iowans.

Similar legislation is pending in the House, but Branstad isn’t interested in a delay. “I understand there’s always going to be resistance whenever you look at making a major change like this, but this is long overdue,” Branstad says.

Branstad was successfully sued over the closure of Workforce Development offices around the state in 2011, but by the time the case made its way through the courts the offices had been closed. Another lawsuit still pending challenges Branstad’s authority to close the Iowa Juvenile Home. Branstad says “not everyone is going to like” the actions he takes.

“The buck stops with me,” Branstad says. “I have to make tough decisions and I’m willing to do that because the people of Iowa elected me to reduce the size and cost of government.”

Branstad says after repeated recommendations over the past 40 years to close the state-run Mental Health Institutes in Clarinda and Mount Pleasant, it’s time to take action. Branstad made his comments this morning during his weekly news conference.