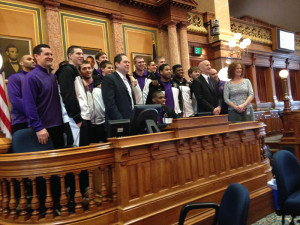 The UNI basketball was honored by the Iowa Legislature..

The Iowa House and Senate today honored the University of Northern Iowa men’s basketball team for its championship season.

UNI won the Missouri Valley Conference Championship and won 31 of its 35 games — breaking the school record of most victories in a season.

Senator Jeff Danielson of Cedar Falls shook coach Ben Jacobson’s hand as he handed the team leader a copy of the senate resolution honoring the team.

“Thank you so much for your leadership, not only on the court but off the court. We understand you’ve signed a long term contract,” Danielson said, as other senators cheered and clapped. “We’re happy to hear that.”

Representative Bob Kressig of Cedar Falls read from the resolution that passed the House early this afternoon.

The section of the resolution that Representative Walt Rogers of Cedar Falls read noted the Panther’s undefeated record at home in the McLeod Center.

“The team’s 16 consecutive wins and seven consecutive road wins ignited UNI fans and alumni not only in the Cedar Valley that UNI calls home, but across the state, the nation and the world,” Roger said.

Coach Jacobson was allowed to speak on the senate floor.

“We are the University of Northern Iowa. We are extremely proud of it. We also understand that we represent the entire state of Iowa when we have the opportunity to go out and play in the NCAA tournament. We also understand we represent everybody in the things that we do every day on and off the floor,” Jacobson said, then he gestured to his team. “These guys are absolutely tremendous in everything that they do.”

Jacobson’s team beat Wyoming by 17 points in their first NCAA tournament game this March, but the Panthers lost to Louisville in the following round. Jacobson was named “coach of the year” in the Missouri Valley Conference.