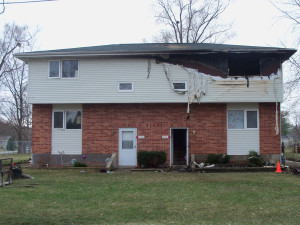 Duplex in Evansdale where two kids were saved by construction workers.

Two construction workers are credited with saving two children from a burning duplex near Waterloo on Monday afternoon.

Travis Moen and Ryan Siems were pouring concrete on a driveway in Evansdale when the fire broke out across the street. Wendi Smith ran from the two-story duplex screaming that her bedroom was on fire and her children were inside.

“They both went up there and got that child out of the back bedroom and brought him out,” Jensen says. “The mom had handed off one of her other children, a small girl, to one of the men and they brought them out. They got everybody out of the apartment by the time I arrived on scene, which was a godsend because I don’t know what would have happened had they hesitated a moment.”

The two rescuers found the 3-year-old boy upstairs and the 5-year-old girl on the ground floor. “There was a mattress that was on fire and I arrived seconds later,” Jensen says. “When I got here, there were flames coming out of the window of the bedroom and the windows were popping.”

Jensen says he was patrolling nearby and arrived at the scene just seconds after receiving the call. In that short of time, the fire had already grown very intense. “I got the call and I was here probably 30 seconds later and the smoke was rolling out of that window bad and flames had blown out the window already and were taking over and were lapping at the roof.”

Fire crews from Evansdale, Waterloo and two other nearby communities — Gilbertville and Raymond — were called to the scene. Jensen says the apartment where the fire started was heavily damaged, while the adjoining unit sustained mainly smoke damage.

Investigators believe the fire was started by the 3-year-old playing with a lighter. No injuries were reported, but Jensen says six people were displaced by the fire. The Hawkeye Chapter of the American Red Cross was called to assist both families with emergency shelter.