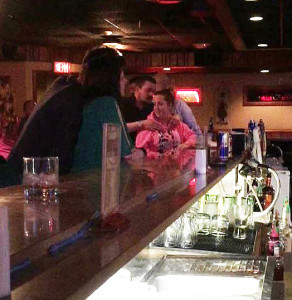 Des Moines police released this picture of the murder suspect. He is behind the women in pink at the bar.

Police say the victim of a weekend assault at a Des Moines bar has died. Fifty-year-old Andrew Purcell was found on the ground, unconscious, outside Gerri’s Tavern on Des Moines’ east side shortly before 1 a.m. Sunday.

Police say Purcell died on Monday and the case is now being treated as a homicide. The person accused of attacking Purcell has not been identified, but police have released photos of the suspect taken from surveillance cameras inside the bar.

The suspect is believed to be a white man in his late 20s to early 30s, about 5-foot-8 inches tall and of “medium build.” He last seen leaving the area in a red, extended cab pickup.

A woman wearing a pink hooded sweatshirt was with him in the bar.