You are here: Home / Business / Omaha-Council Bluffs moves toward one million mark in population 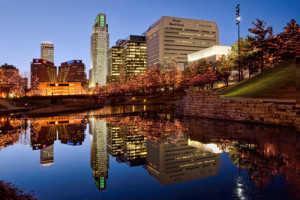 In less than a decade, the population of Omaha-Council Bluffs is expected to hit the one-million mark.

Randy Thelen, a vice president at the Greater Omaha Chamber of Commerce, says this could open up another world of economic development for the metro area which straddles the Missouri River and the Nebraska-Iowa border.

“You have the ability to get the attention of more retailers across the country that want to be in markets of a million,” Thelen says. “You have the ability to make the cut on more companies that are considering projects. They use that million population number as a filter and it would certainly get us over the hump, if you will.” Thelen says one million seems to be the magic number that expanding companies want to see before they’ll consider opening an outlet in a city.

“We also have companies we know are filtering us out because we’re under a million,” he says, “so getting to that number is going to be a big milestone for the region.” The metro area’s population now is just over 900,000 and it’s expected to reach the one-million mark by 2023. Thelen says it proves that slow and steady wins the race.

“We’re not this boom and bust market but we’ve got this consistent, steady, strong growth,” he says. “If you’re a business here, that means the prospects for growth for them is strong, and if you’re looking at the market, it remains strong as well.” The metro area includes five Nebraska counties and three in Iowa — that’s Douglas, Sarpy, Cass, Washington and Saunders counties in Nebraska and Pottawattamie, Mills and Harrison counties in Iowa.