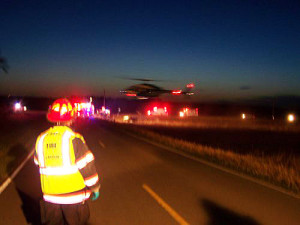 Helicopter takes away a victim from the accident in Plymouth County.

Shawn was airlifted from the accident scene to Mercy Medical Center in Sioux City, then transferred to Children’s Hospital in Omaha, Nebraska where he died Monday. Shawn’s older brother, nine-year-old Adan Perez Antonio was pronounced dead at the scene of the accident.

Traffic accident investigation from the Iowa State Patrol say the Chevy Colorado pickup truck which was driven by 37-year-old Shanna Boggs, and carrying the two boys failed to stop at the posted stop sign and collided with a Ford Explorer. The three people in the Ford Explorer have been treated and released from Floyd Valley Hospital of Le Mars.