You are here: Home / Health / Medicine / About four dozen march at statehouse for medical marijuana law 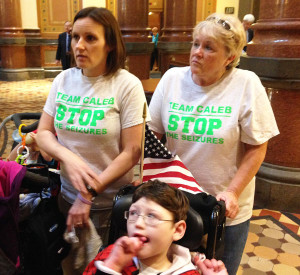 About 50 people marched around the statehouse over the noon-hour Tuesday and then met with legislators to lobby for a new state law that would allow marijuana to be grown and dispensed in Iowa — as treatment for a wide range of medical conditions.

Maggie Adams of Mason City has transverse myelitis and, while she’s no longer paralyzed, she’d prefer to use cannabis to control her pain rather than take the prescription drugs.

“The medication — I hate it,” Adams said. “I get to (where) I can’t think and talking wise, I get tongue-tied.”

Adams was at the statehouse Tuesday with her daughter and two grandchildren — one of whom suffers from chronic epilepsy. Adams and her daughter, Cassie Helland of Mason City, were wearing t-shirts that read: “Team Caleb: Stop the Seizures.” That’s because Helland’s 10-year-old son, Caleb, has frequent seizures and none of the prescription drugs are working.

“The meds are at the max dose, so now we’re just kind of, ‘What do we do?'” Cassie Helland said. “And we just want them to see a face to our stories and, you know, hopefully they’ll pass this so we can have it. I mean, we can legally own it, but there’s no way for us to get it.”

The Iowa legislature last year passed a bill that decriminalized possession of cannabis oil for the treatment of chronic epilepsy, but it’s not legal to sell it here and Helland said she cannot go out-of-state to get cannabis oil and bring it back.

A bill ready for debate in the Iowa Senate would allow up to four marijuana growing operations in Iowa and allow up to a dozen separate businesses that could dispense the drug for treatment of a long list of conditions that cause chronic pain, nausea and seizures. On Tuesday morning, Senator Bill Dotzler, a Democrat from Waterloo, delivered a 20-minute speech on the Senate floor to describe how he understands marijuana may help certain patients.

“Let’s do what we’ve been sent here to do,” Dotzler said. “Let’s pass something that’s going to help Iowans.”

And Dotzler criticized those who favor a go-slow approach.

“These patients can’t necessarily wait,” Dotzler said. “…They have chronic diseases that can take their lives and they’re slowly dying.”

Senator Mark Chelgren, a Republican from Ottumwa, said he’s “on the fence” about the bill until he finds “documentation” somewhere that confirms cannabis is a medicine.

“Because I am struggling with this,” Chelgren said. “I can tell you up front I have not made a decision on this bill.”

Senator Dennis Guth, a Republican from Klemme, said he’s been trying to do the same kind of research.

“But I’m not so sure this is a place that legislators should be making the decision,” Guth said. “I’m thinking we want to have someone with a medical degree doing this.”

After the half-hour-long discussion among the three senators concluded Tuesday morning, Senate Democratic Leader Mike Gronstal of Council Bluffs quipped: “If we’re done debating the bill, maybe we should just vote on it.”

It’s unclear when senators may take up the bill. Key senators say they’re working on amendments that would make change in the bill and it’s taking a while to work through all the details.