You are here: Home / Education / Some students walk out over decision on gay teacher at WDM Dowling Catholic High School 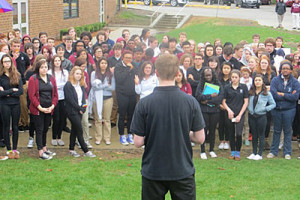 More than 100 students at Dowling Catholic High School in West Des Moines staged a walkout this afternoon to protest the school’s decision to deny a former substitute teacher full-time employment because he is openly gay.

School administrators sent a letter to parents this week saying they were not offering the teacher a contract, citing “a personal situation at odds with Church teaching.”

Dowling sophomore Grace Mumm helped organize the rally. She says although the protest will not lead to employment for Tyler McCubbin at Dowling, she hopes it delivers a message. “Let the community know the decisions of our school leaders and our diocesan leaders do not directly reflect what the students believe,” Mumm said. “As you can see by the turnout, that’s kind of coming true.”

Dowling junior Delaney Dunne identified herself as bisexual as she addressed the crowd. “I just don’t want students to feel like they aren’t welcomed at this school…because there are closeted people everywhere who don’t feel accepted in the real world, and I just think at school you should feel safe and accepted,” Dunne said. Dozens of Dowling graduates joined the students for prayers and speeches.

Legal experts say the school is within its rights under Iowa law to refuse employment because of sexual orientation since it is a religious institution.

In the letter to parents this week, school administrators said they did not extend a contract to the teacher because of their “expectation that staff and teachers support [their] moral beliefs.”