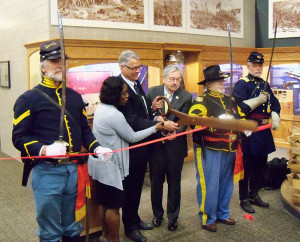 Bob Holliday, the chair of the Gold Star Museum board, says the exhibit fits into the theme and missions of the museum, “One of which, and perhaps the major one, is to recognize an honor any Iowan who has ever worn a uniform,” Holliday says.

Holliday says it is important to continue to remember the efforts of the Iowa men and women who have served in the military. “As I say to groups, we live in the freest country in the history of this the world. Had our fellow citizens — in this case Iowans — not answered the call, stop and think where you’d be,” Holliday says. 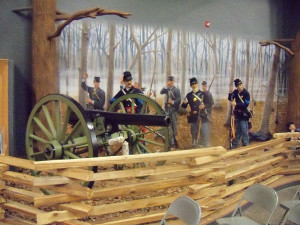 A diorama depicts Iowans at the Battle of Shiloh in April of 1862.

Governor Terry Branstad helped cut the ribbon to dedicate the exhibit. “Our state has a rich tradition of answering the call an important player in helping defend the freedoms and the opportunities in this country,” according to Branstad.

The governor points out that Iowa was a relatively new state when the war broke out in 1861, yet 76,000 Iowans, or about 13-percent of the state’s population at the time, served in the war.

“We in Iowa I think have a lot to be proud of, because from the very early times ion our state, Iowans have always responded to the call to help our nation to defend and preserve this great experiment in self-government that we have,” Branstad says.

The exhibit features weapons, artifacts, images and documents detailing the experiences of Iowans in the war. It also includes a life-size diorama and mural depicting Iowa troops fighting in the Battle of Shiloh in April 1862.

Gold Star Museum curator Mike Vogt oversaw the creation of the Civil War exhibits. “My intent as a curator and historian it that each object — carefully preserved and selected for exhibition — will not simply be viewed as an interesting curiosity,” Vogt says, “but rather connect us to the personal stories of heroism, courage, patriotism and sacrifice that have been a part of Iowa’s philosophy for generations.”

Vogt says the Union soldiers were the 19th Century’s “Greatest Generation.” “For Iowans of the Civil War Era, Union Army service was a defining event of their lives. For some it was the first time and only they traveled outside of Iowa,” Vogt says.”Other Iowans witnessed in vivid human form the victims of slavery, an institution that they helped vanquish. For that generation of men, Civil War service was a source of pride they carried as a badge of honor for the rest of their days.”

This exhibit was made possible by a grant from the Gabus Family Foundation and other private donations. The Gold Star Museum at Camp Dodge near Johnston is open Monday through Friday from 8:30 a.m. until 4:30 p.m., and Saturday from 10:00 a.m. until 4 p.m. It is free to the public.