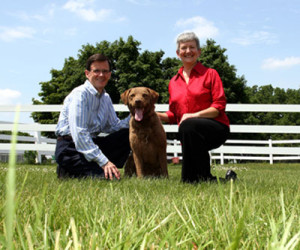 A north-central Iowa couple is making a first-of-its-kind gift to the Iowa State University Alumni Association. Russ and Lora Talbot of Belmond made a $2.5 million donation to create the first non-academic endowed position at ISU.

It establishes the first endowed alumni association president and CEO position at any U.S. college or university. Russ Talbot said they wanted to showcase the association.

“This will be a source of funding that will be available into the future and can be used for a variety of purposes,” Russ Talbot says. “It’s intended to increase the visibility and to further advance and showcase the alumni association’s excellence.”

Lora Talbot noted that she and her husband both graduated from Wartburg College, but they’ve developed a relationship gradually with ISU over many years. She says it all started after she read about two programs at the Ames institution that involved animals.

“We did a lot of dog-sitting for some friends in the Des Moines area and instead of having them pay us, we asked them to make a contribution to the Companion Animal Fund or the Wildlife Care Clinic,” Lora Talbot says, “and they really enjoyed doing that.” She says they started deliver the checks in person and began to develop relationships with the ISU staff that continued to blossom over the years. Jeffery Johnson is the current president and CEO of the ISU Alumni Association and he’ll be the first holder of the endowed position from the Talbots.

There are more than 52,000 members who belong to the association which facilitates a lifetime connection of alumni, students and friends of Iowa State University.