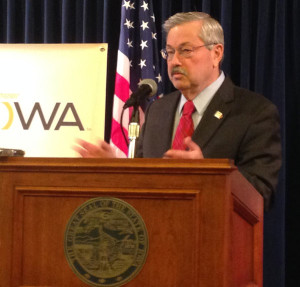 Governor Terry Branstad is expressing compassion for a gay man who was denied a full-time job at Dowling Catholic High School in West Des Moines, but Branstad is also supporting school officials who say the man’s gay lifestyle is “at odds” with Church doctrine.

“I believe everybody should be treated with respect and dignity,” Branstad told reporters this morning at his weekly news conference. “But I do also respect the rights of religious communities to have hiring practices based on the tenants of their faith.”

More than 100 Dowling students staged a walkout last week to protest the school’s decision to deny a former substitute teacher full-time employment after school administrators learned he is openly gay. Iowa’s non-discrimination law does not apply to religious institutions and the governor does not support changing that.

“My heart goes out to both the individual involved and to the school,” Branstad said. “These are difficult matters and I do think everybody should be treated with respect and dignity, but I also understand why churches and affiliated schools feel that they should be able to have hiring practices that fit within the tenants of their faith.”