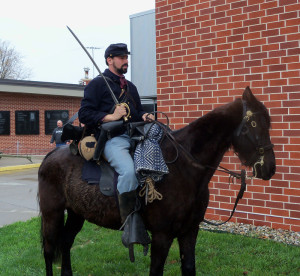 Iowa’s participation in the Civil War is highlighted in a new exhibit now open at the Gold Star Museum at Camp Dodge near Johnston. Museum curator, Mike Vogt, says they don’t have a large number of artifacts in this exhibit compared to some museums.

“But we have a variety of things that represent, for lack of a better term, the humanity of those who served in the war,” Vogt says. He says that includes the diary written in German from a man who lived in LeClaire and served in the war.

Other items focus on the personal lives of soldiers and their overall life in the army. “We have pin cushions given to an Iowa soldier marching through the South as part of Sherman’s campaign given to him by a southern gal. We have cavalry manuals, we have the sword, scabbard and saber and a picture of an Iowan,” Vogt says. He says the picture of the Iowan carrying that sword that is on exhibit was found at the Carlisle Barracks in Pennsylvania.

The largest piece of the exhibit is a diorama that features Iowans fighting in the Battle of Shiloh in April 1862. “We hired an artist, John Neal, who depicted in very accurate, very realistic form, Iowans engaged in combat in the Civil War, and then we have arranged three-dimensional dressed figures in uniform in front of that to give that illusion of depth,” Vogt explains. 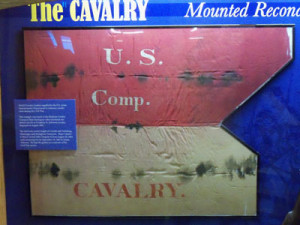 One other key piece in the exhibit is a battle flag carried by Company K of the 2nd Iowa Volunteer Calvary from Burlington. “When the war ended, a major from that unit folded that flag up and brought it home and kept it as a keepsake and years later his granddaughter donated it to the museum,” Vogt says. “So, that is the only Civil War battle flag in our collection, and we are very glad to have that and very proud to have that as part of our exhibit today.”

The new exhibit was dedicated last week on the 150th anniversary of the end of the Civil War. Civil War re-enactor Roger Shannon was there in his period uniform to sing at the dedication. He became interested in the Civil War through his family history. “Whenever we would go out on Memorial Day to the cemetery, grandpa had Company I of the 80th Ohio on his gravestone. And of course he had the star for the Grand Army of the Republic, GAR,” Shannon explains. ” So, I always knew that that meant something to him and for whatever reason was always 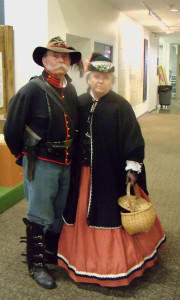 Roger and Carolyn Shannon at the opening of the Gold Star Museum Civil War exhibit.

interested in military history and had a kinship because of that.”

One of the Union songs that Shannon performed at the dedication was “Who Will Tell the World the Story.” It talks about keeping the memory of the soldiers’ effort in the Civil War alive.

“They knew that what they had done was something truly monumental, the same way the fellows knew in World War One, World War Two, Korea and Vietnam. And they certainly want the future generations to realize the sacrifice that was made to save the union,” Shannon says. Shannon says the new exhibit and the entire Gold Star Museum is a great way to keep the stories of the soldiers alive.