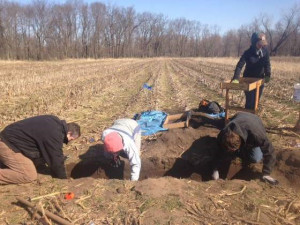 Archeologists work at the site of a former Meskwaki village near South Amana.

Researchers from the Office of the State Archaeologist say they’ve unearthed around 1,000 artifacts that are more than 150-years-old from a farm field in eastern Iowa. Archaeologist Cynthia Peterson told KCRG-TV the field near South Amana was a Meskwaki village from 1839 to 1843.

“We only securely know the locations of about four of these Meskwaki villages from this time frame and this is the first one where we’ve actually gotten to do excavations,” Peterson said. “We really knew nothing before we got out the there.”

A woman discovered the former village about 10 years ago. She was walking in the area, found artifacts on the ground, and contacted state officials. Archaeologists wanted to excavate sooner, but were set back by financial constraints and weather conditions.

State archeologist John Doershuk plans to meet with Meskwaki tribe members to get their input on the artifacts after they’ve been cataloged. “Once we have it cleaned and organized, we’ll be working with the Meskwaki and have them help tell their story. They’ll tell us what they can about how the different materials were used,” Doershuk told KCRG.

The archaeologists and volunteers dug up the artifacts over a seven day period earlier this month. Gun parts, a musket ball, pieces of animal traps and broken tobacco pipes were among the items found. Doershuk said archaeologists may return to the site for further excavation in the future if they can secure more money to do so.