You are here: Home / News / Giant goldfinch will fly at the Des Moines airport this fall 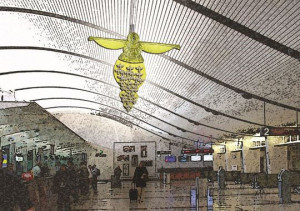 A drawing of the bird art being created for the airport.

A few thousand people who attend the Des Moines Arts Festival this summer will be able to take part in a project that will eventually adorn the ceiling of the Des Moines International Airport.

“It’s going to be a large, abstract representation of a goldfinch that will have the texture from participants at the art festival kind of spatter-painting like Jackson Pollock all over it,” Thammavong says. “Then, I’ll take it back to my studio and put an overcoat on it so from a distance, it’ll be this big yellow bird and as you get up close to it, you’ll notice all of this texture.”

The giant goldfinch will be followed by a jet contrail, a sort of long metal cloud, on which many hundreds of bird-shaped kites will be placed, kites that will also be painted by attendees to the arts festival.

“We’re predicting that the jet trail will be about 20 feet long and we’re hoping to be able to fit, in layers, about a thousand there and then we’ll probably have to add another set,” Thammavong says. “So, this thing could get up to 40 feet long behind the bird, and the bird itself is about a 12-foot wingspan and about 14-feet long from head to tail.”

Thammavong, who emigrated to Iowa from Laos as a boy, says he’s thrilled to be the lead professional on a project which will also involve so many other amateur artists. “You can find your bird, point at it up there and do a ‘Where’s Waldo’ kind of thing and see your artwork hanging up there among all the other birds,” Thammavong says. “This is the kind of art community-building that these projects lend themselves to and we’re really excited to do that.”

The Des Moines Arts Festival runs June 26th through the 28th. The artwork will start going up in the airport’s baggage claim area in August with the formal unveiling scheduled for October 16th. Last year, the airport served more than 2.3 million passengers, the third year in a row it topped two-million.