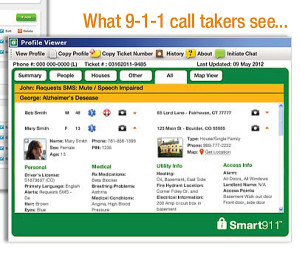 Promotional information on the Smart911 system.

That state’s largest county is the second to offer an enhanced emergency calling option to residents known as Smart911.

“You call 911, you’re unable to speak. Then with your Smart911 profile you could show your allergies or the medications you’re allergic to,” Brear explains. “So the responders, the EMS responders will be able to see what potentially is wrong even though you can’t speak.”

Dubuque County became the first in the state to offer the voluntary service in December of 2013. Dubuque County emergency services director, Mike Murphy, says the service has been used by many “There’s no numbers that I am free to tell you on how many people signed up because it is part of the confidentiality thing. But it is being used, and we’ve used it to the benefit of the customer,” Murphy says.

Murphy says the service isn’t limited to private residences as business owners can also create a profile for the service. He says the confidential profiles can also include things other than medical information.

“If there’s other types of information, the door, location of the building, things like that we can give to the responders as well to help access the emergency,” Murphy says. He says the county continues to get people to sign up for the service to help them and help the responders do a better job. “Especially with more and more people giving up their home land-line phones. This program allows them to put the information, address so forth and any other information they would like us to know about them so we have that information available to us, since they are basically just using a cellular phone these days,” Murphy says.

The cellphones do not provide as much information when you make a 911 call with them. Murphy says the confidentiality of the information is one of the biggest concerns holding people back from signing up.

Murphy hasn’t seen anything he’d change in the approximately 16 months the system has been in use in Dubuque County. “No, it’s been a very good system, the information comes up automatically if the person has a profile attached to phone number,” according to Murphy. Polk County officials are using the same system as Dubuque County with the same security and confidentiality settings.