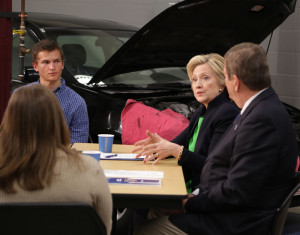 “I just want us to trust and respect especially our teachers again so that we can get to where we need to go,” Clinton said.

Clinton met with a small group of students and educators at a community college center in Monticello yesterday. The event was staged inside an auto tech lab for students at a Kirkwood Community College center in Monticello. One of the instructors who participated in the roundtable discussion lamented the attacks on “common core” standards for schools. Clinton called the attacks from many in the Republican presidential field “very painful” to hear, since the “common core” effort had started as a “non-partisan” agreement among the nation’s governors.

Clinton closed the 90-minute event by speaking about her decision to seek the presidency.

“Believe me, I know that it’s not going to be easy, that I’m going to have to work hard to earn every single vote and get every single Caucus-goer I can round up to show up next February,” Clinton said. “…I couldn’t walk away from what I see as the challenges we face and I want to build on what we’ve done to get out of the terrible recession and get back on our feet, but we have to run the race and I don’t want people whose views about how we run that race that I don’t believe are in the best interests of our country to be making the decisions.”