You are here: Home / News / Iowa store to get copies of early Elvis record 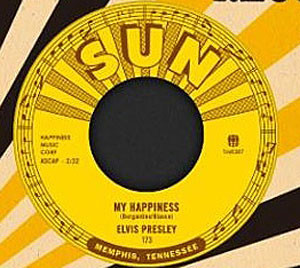 Copies of one of Elvis Presley’s first recordings will be available at ZZZ Records in Des Moines.

Iowa record collectors and Elvis Presley fans are getting all shook up over the release of an exceptionally rare recording of The King from when he was still a teenage prince.

Pressings of the special edition 10-inch record are being made available for sale at select music stores, like ZZZ Records in Des Moines.

Store owner Nate Niceswanger says he hopes to get the discs in within a few days. “I think most people will buy this as a collectible, probably not to play but to put on a shelf or just to display in a frame,” Niceswanger says. “Even the reissue will be very, very limited so it’s something that not all of your friends are going to have.”

The 78 RPM record features a very young Elvis in his first-ever recording, crooning a couple of standards: “My Happiness” and “That’s Where Your Heartaches Begin.”

“It’s going to be a very unusual recording, really a one-of-a-kind recording that was made by Elvis back when he was about 18 years old,” Niceswanger says. “This was an attempt that he made to try and get himself noticed. He did want to end up on the Sun label which he did, eventually.”

The recording includes all of the pops and crackles for which vintage vinyl is famous, or infamous, and it’s said to be accurate right down to the typewritten labels. The original was recorded at Sam Phillips’ Memphis Recording Service on July 18, 1953. “This was a recording he did by basically spending about $4, he went into booth, recorded himself and he had two songs pressed onto a record,” Niceswanger says. “This was a one-of-a-kind record that was kept by an individual and it was recently sold at an auction for $300,000.”

Musician Jack White was later revealed as the mystery buyer. The copies are expected to sell, at least at ZZZ, for between $20 and $25. The small shipment of records may not arrive in Iowa until next week, which will be too late for Record Store Day — which is Saturday — though Niceswanger is still expecting a very busy weekend for the international promotional event.

Record industry sources say a 7-inch 45 RPM version will be produced later this year that will be a cleaner, restored version of the recording.