You are here: Home / Crime / Courts / Quinnipiac poll shows Iowans have split views on marijuana use 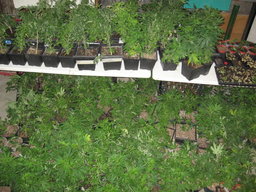 A new survey shows Iowa voters are divided over the issue of legalizing possession of small amounts of marijuana for personal use.

Peter Brown is assistant director of the Quinnipiac University Poll. “Iowans are split right down the middle on the question of legalizing recreational use of marijuana, 47-percent of Iowans told Quinnipiac they favor legalization, while 47-percent oppose it,” Brown says.

In Iowa, Brown notes support for legalized recreational use of marijuana is much stronger among Democrats than Republicans. There’s also a large gap on the issue among age groups.

Support for personal use of marijuana is 62-32 percent among voters 18 to 34 years old, while voters 35 to 54 years old are divided 47-47 percent and voters over 55 years old are opposed 53-41 percent. Iowans, meanwhile, overwhelming favor the legalization of marijuana for medical purposes.

The Quinnipiac poll shows 87-percent of the Iowans surveyed support the use of medical marijuana, while 11-percent are against its legalization. Last week, dozens of people took part in a rally at the statehouse and met with legislators to lobby for a new state law that would allow marijuana to be grown and dispensed in Iowa — as treatment for a wide range of medical conditions.

The Quinnipiac University Poll was conducted between March 29 and April 7 and involved phone interviews with 948 Iowa voters.