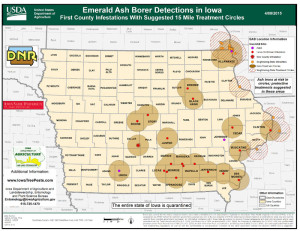 The Emerald ash borer (EAB) has been found in another Iowa County. State Entomologist Robin Pruisner says the destructive pest has been positively identified in Dallas County in a tree on the outskirts of Waukee.

“We have 21 counties already that have some level of EAB infestation in them now,” Pruisner told reporters and others gathered at a news conference held in a Des Moines park this morning.

Trees infected with EAB typically die within three years. Iowa has more than 3 million ash trees located in urban areas and an estimated 55 million in woodlands. Tivon Feeley, with the Iowa Department of Natural Resources, does not believe the invasive beetle will completely wipe out all of the state’s ash trees.

“I do believe that we’re going to see ash that have some tolerance out there,” Feeley said. “We’ve seen that with elm and Dutch Elm Disease and it’s taken many years for us to breed that resistance. But, you can go buy true America elm today that is tolerant to the disease. I think eventually we’ll see the same thing with ash, so we’ll breed resistance in there and we’ll have ash on the market.”

Feeley is encouraging woodland owners in Iowa to consider leaving their ash trees alone. “If you have some out there and you need to harvest them for income, it would make sense to harvest those (ash trees) because you rely on that income. However, if you don’t rely on those, just let the emerald ash borer run its course. Let’s see if any of them remain after that first wave goes through and see if there’s any resistance afterwards.”

In many Iowa towns and cities, ash trees make up 15 to 20 percent of the tree population. Many cities have been removing ash trees located on public property or using insecticides to try and save ash trees. Iowans with healthy ash trees on their property are being encouraged to contact a tree service company to learn about treatment measures.