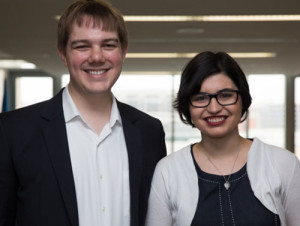 Computer software developed by two young Iowans to help food pantries feed the needy has won a national contest and more than $60,000 to further develop and market their product.

Maria Belding of Pella and Grant Nelson of Des Moines created the MEANS Database, an online system enabling food pantries to communicate with each other and their donors to prevent waste.

This week, the pair beat out more than 100 other applicants to win the George Washington University Business Plan Competition. “We became the first-ever non-profit to win,” Belding says. “We were very, very surprised that we won because almost all of the judges were venture capitalists and bankers and investors and people whose world and whose minds operate around ‘How can I make the most profit?’ and ‘How can I grow a business?’ and we’re not a business, we’re a non-profit.”

Belding is a 19-year-old freshman at American University, while Nelson is a second-year law student at GW. Belding says the money will help give the MEANS Database a significant boost in developing better technology, understanding the law and refining its analytics. Also, a welcome change, they can start to pay some staff members.

“I get to work for MEANS full-time this summer in Washington, D.C., which is fantastic,” Belding says. “I get to spend all summer feeding people which makes me incredibly happy. It’s the best summer job a girl could have. We’re also going to get to work with other college students who are helping us out right now. We’re going to get to buy their time this summer and just really pound the pavement on outreach.” MEANS stands for Matching Excess And Need for Stability. It lets food pantries post information about surplus supplies on a website that can be searched by other organizations serving the hungry.

The database was created after Belding had a discouraging experience when she was in high school and volunteering for her church’s food pantry in Pella. “We had another church give us a year’s worth of macaroni and cheese which is awesome,” Belding says. “Less awesome was that it was macaroni and cheese which we already had a literal wall of in the basement. We ended up having to throw a bunch of it out when it expired because we couldn’t talk to the food pantries that were within the same county. We couldn’t communicate effectively.”

Hundreds of boxes had to be chucked in the dumpster, while hungry people had to be turned away in the dead of an Iowa winter.

The eventual result was the MEANS Database, which is now in use by 1,400 food pantries across Iowa and in five other states. Just this week, New York’s second-largest food pantry began using the software, which is available free at the website: www.meansdatabase.com.