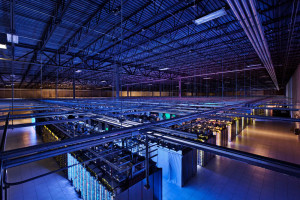 The inside of Google’s data center in Council Bluffs.

The Iowa Economic Development Authority (IEDA) board agreed today to award Google nearly $20 million in tax incentives for the technology giant’s expansion of a data center in Council Bluffs. The IEDA’s Paul Stueckradt outlined the proposal at the board’s meeting in Des Moines.

“They’re proposing to invest an additional $1 billion at that location,” Stueckradt said. The Google project was initially approved in 2012 and the IEDA board at that time awarded the company with nearly $17 million in tax incentives. Stueckradt said when “phase two” of the project is complete, Google will have invested about $2.5 billion in the Council Bluffs facility, making it the largest economic development project in the state. “They’re also pledging to create an additional 35 jobs, for a total of 70,” Stueckradt said.

In addition to the Google project, the IEDA board awarded $360,000 in tax credits to Curly’s Foods in Sioux City. Officials with the food producer are planning a $9 million expansion that will create 30 jobs.

Chris Myres, with Sioux City Economic Development, doesn’t believe Curly’s will have any problem finding the needed workers. “The John Morrell (pork) plant closed about five years ago and we have good reason to believe a lot of those people are still in Sioux City who are either underemployed or are still looking for employment,” Myres said. “We think there are a lot of people with the aptitude to get in there and help out Curly’s.”

The John Morrell plant had nearly 1,500 workers. Curly’s Foods currently has a workforce of 650. The expansion by Curly’s will benefit several other companies and producers around Sioux City, according to Myres. “We’re geared up with all of the trucking companies, construction firms, and everything from pallet makers to box makers and everything in between,” Myres said. “Curly’s buys their meat from other local processors, so there are a lot of local firms that will see benefit out of this project.”

Curly’s Foods is a subsidiary of Virginia-based Smithfield Foods. Overall, action taken by the Iowa Economic Development Authority board today is expected to help with the creation of 150 jobs and result in almost $16 million in new capital investment for the state.

The board awarded direct financial assistance to software developer FunnelWise in West Des Moines and to heavy road equipment maker Weiler, Incorporated in Knoxville. The FunnelWise expansion is expected to create 14 jobs, while Weiler officials say their $6.6 million project will create 106 new jobs.