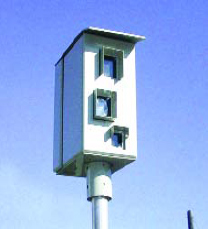 Sioux City has filed a lawsuit against the Iowa Department of Transportation over the order to shut down traffic cameras on the interstate. The lawsuit is in addition to an appeal the city made of the D-O-T order to turn off speed and red light cameras. Mayor Bob Scott says they city is seeking an injunction to block DOT rules governing traffic cameras.

“We had an earlier ruling that said that the DOT violated their own rules about how they did the hearing to even allow these rules to go into place. And we think until that court settles that issue — that these rules should not be put in place,” Scott says. Scott says he believes it’s an issue of local control. “Whether we have cameras or not, for me it is a home rule issue. We have reduced fines on them, we’ve done a lot of things where our revenue should not be the issue anymore,” Scott says. “For me it’s home rule — whether it be cameras or other things — the city should have some say. The state should not be the only group having a say of what happens inside our boundaries.”

A hearing on the issue is set for Tuesday in Woodbury County District Court.