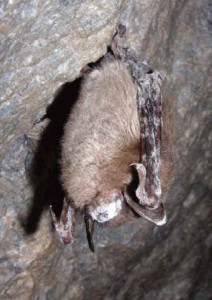 State and federal wildlife officials say a disease known as “white-nose syndrome” has been confirmed in bats in two Iowa Counties.

“Two little brown bats and one northern long-eared bat observed near a cave entrance showed visible signs of white-nose syndrome during monitoring for the disease and were collected at that time,” Poole says. “The U.S.G.S. National Wildlife Health Center in Madison confirmed that the bats had white-nose syndrome .”

There were other indications that WNS was present in the area. “The fungus that causes white-nose syndrome was also detected on additional samples collected from the cave, which as recently as last winter, February 2014, had no visual signs of white-nose syndrome,” according to Poole.

She says WNS was also confirmed in four little brown bats collected in Van Buren County this winter after a concerned citizen reported bats flying around outside. White-nose syndrome causes bats to come out of hibernation and use up needed fat reserves that allow them to survive through the winter. It has been found to be 95-percent fatal to bats.

The fungus called “Pseudogymnoascus destructans” (P. d.) which causes the disease had previously been detected in caves at Maquoketa Caves State Park in 2011, 2012, and 2013, but it was not detected in the last two winters. Poole says they will now try to stop WNS from getting into any other areas of the state. “At this point we will be shifting our focus to making sure that we minimize the potential for spread within the state and for it leaving the state,” Poole says. She says they will continue their bio-security prevention measures and their outreach and education efforts.

WNS is spread mainly by bats, but can be spread by humans, and education efforts include ways to prevent carrying it from one area to another. Jeremy Coleman is the national white-nose syndrome coordinator for the U.S. Fish and Wildlife Service, and says the fungus is not a concern for humans.

“There is no known direct impact on human health from the disease,” Coleman says. “This is a fungus that affects bats when they are in hibernation and their bodies are close to the ambient temperature of the caves. It is a cold-loving fungus.” He says the warmth of the human body makes it highly unlikely the fungus would grow. It is estimated that 5.7 million bats have died from WNS since 2006.

Coleman says there is a great concern about how those loses will impact the ecosystem. “Bats are the primary predator of night-flying insects in many of the forests and agricultural areas where they exist, and they are known to eat crop pests and other pest species. And their loss is estimated to be at a minimum of $3.7 billion to agriculture,” Coleman says.

Iowa is the 26th state where the disease has been detected. Volunteers are needed in Boone, Clayton, Dubuque, Hamilton, Hardin, Jackson, Lucas, Marshall, Story, and Warren counties for summer volunteer programs to monitor bats.

For more information visit the DNR website at: ww.iowadnr.gov/volunteerwildlifemonitoring, or email the Volunteer Wildlife Monitoring Program at [email protected]