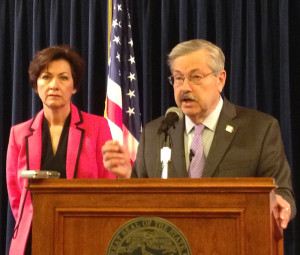 Governor Terry Branstad is defending how the Iowa DOT plans to use the extra money generated from the recent 10-cent hike in the state gas tax.

Iowans for Tax Relief has criticized the DOT for using part of the money to buy land to expand the final section of Highway 20 to four-lanes, saying the tax hike was sold on the idea the money was needed to repair crumbling roads and bridges. Branstad supports the $4.5 million land purchase.

Officials in Clinton have sparked controversy by floating the idea of using the new gas tax revenue the City of Clinton will get to hire three new employees to repair city streets. Branstad isn’t supporting that.

“I think it would be a mistake to use this additional money which is supposed to go for roads and bridges for the City of Clinton and any of the cities and counties to hire more staff,” Branstad said.

The chairman of the Iowa Department of Transportation Commission is from Clinton and he has criticized the idea. Key legislators from both political parties who were involved in guiding the gas tax bill through the House and Senate have also said gas tax money should be spent on infrastructure, not salaries.