You are here: Home / News / Governor says ending budget stalemate by end of May ‘ambitious’ (AUDIO) 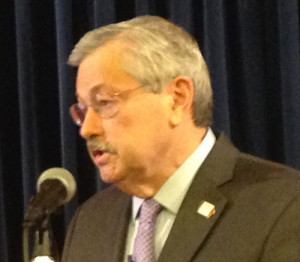 “We’ve been through this before and we’ve been though tougher times than this. I was governor during the Farm Crisis of the ’80s and we’ve always resolved these things,” Branstad said.

But Branstad and his fellow Republicans in the House cannot agree on how much money to spend. House Republicans call the “surplus” of unspent money from the current budgeting year an “overpayment” and argue it should be returned to Iowans as some kind of a tax cut. The budget plan Branstad released in January calls for spending that surplus.

“We do need to get these things resolved and I think the sooner the better,” Branstad told reporters.

As Iowa superintendents faced with budget deadlines of their own issue pink slips to teachers, Branstad argues Iowa school districts should be able to handle the uncertainty over how much state aid they’ll get since there’s been similar uncertainty “again and again” in the past dozen years.

“What I’ve told the school officials who’ve been in touch with me is I believe they will get at least what I’ve recommended,” Branstad said. “…Eventually the legislature is going to have to come to an agreement on this issue.”

Branstad and House Republicans have recommended a one-and-a-quarter percent increase in general state aid for schools, while Democrats in the Senate have proposed more. Senate Democratic originally proposed a four percent increase, but 19 days ago offered to “split the difference” and proposed a two-and-five-eights percent increase. House Speaker Kraig Paulsen of Hiawatha, the top Republican in the legislature, has repeatedly ridiculed that counter offer.

“If they’re under the impression that this is some sort of negotiation over a used car, then I think they’d better get their priorities straight,” Paulsen said late last week. “…We were serious when we put the 1.25 percent increase on the table.”

And Paulsen maintains Republicans won’t budge and that’s their first and final offer in the negotiations. Senate Majority Leader Mike Gronstal of Council Bluffs — the top Democrat in the legislature — offered this response late last week: “I think that’s pretty sad. We’re going to continue to work to do our best to make sure schools keep the teachers they need, the programs they need.”

Legislators are nearly 14 months late in making the decision about how much general state aid districts will get for the school year that start in August. According to state law, the decision should have been made in February of last year, but there are no penalties for legislators and the governor for failing to act.