You are here: Home / Military / Searching for a soldier’s photo, for the ‘virtual wall’ 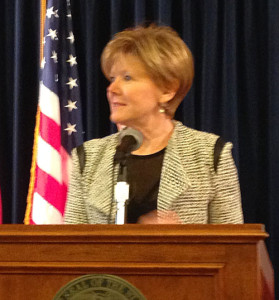 An effort to find photos of all 851 Iowans who died in the Vietnam War is almost complete. Iowa Newspaper Association executive director Chris Mudge says last May the search began for the last 47 photos.

“We have located all but one,” she said today. “David Leroy McCombs served in the Army. He died on October 11, 1969 at the age of 26. He was from Oskaloosa. We hope to find a picture of David so he can be placed next to his 850 comrades who, along with David, made the ultimate sacrifice.”

The photos are part of the “Faces Never Forgotten” project. A virtual wall of soldiers’ faces will be featured in the education center next to the Vietnam Memorial in Washington, D.C. Governor Terry Branstad asked Mudge to speak at his weekly news conference to issue what Branstad referred to as a “call for action” in hopes of finding someone who knew McCombs.

“As a Vietnam era veteran and the governor of Iowa, I want to ensure that every Iowan who made the ultimate sacrifice for our nation is recognized and honored,” Branstad said.

A fire destroyed key military records and officials do not know what race McCombs was, or where he may have attended school. They have found his birth certificate and know his hometown was Oskaloosa. His last known address was California. Branstad said anyone who may have information about McCombs should contact the Iowa Department of Veterans Affairs.