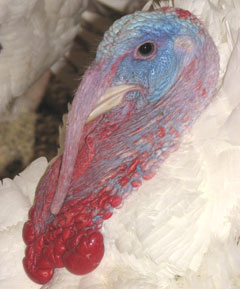 It’s been almost a week since state officials confirmed a very deadly version of bird flu in a turkey flock in northwest Iowa’s Buena Vista County and poultry producers statewide are staying vigilant to prevent the spread. So far, no new poultry flocks in Iowa have been impacted.

Katie Olthoff raises turkeys near the Hamilton County town of Stanhope and says numerous precautions are in place. “We’re practicing really great biosecurity right now, clean boots, clean clothes, clean hands, clean equipment,” Olthoff says. “We’re limiting visitors inside of our barns and our family is trying to stay away from anywhere that there may be wild waterfowl.”

It’s believed wild waterfowl are spreading the disease. The discovery of the H5N2 virus forced the destruction of the entire 27,000 turkey flock in Buena Vista County. While this strain of influenza is particularly deadly to chickens, turkey and other poultry, it hasn’t hit any people, but that doesn’t mean we’re immune.

“It is a flu virus so it can mutate to effect humans, but so far, it hasn’t,” Olthoff says. “In all the farms that have been effected, and there have been 22 up in Minnesota and several others in the Midwest, the Department of Public Health has been monitoring the farm employees and they have not seen any flu symptoms in those farm employees.”

Olthoff is a communications specialist for the Iowa Turkey Federation, based in Ames. In addition to Iowa, cases of this type of bird flu are reported in Montana, Minnesota, Kansas, North and South Dakota, Nebraska, Wisconsin and Missouri.