You are here: Home / Agriculture / Planting season is now underway 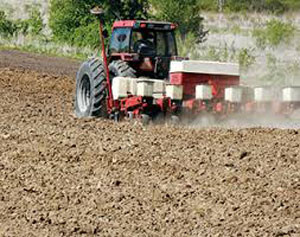 Some farmers were able to get the planters rolling last week. The U.S.D.A.’s weekly crop report shows farmers used some warmer weather to get into the fields and 7 percent of the corn crop is now planted.

The report says the planting is 4 days ahead of normal compared to last year — but right at what the state has seen in the 5-year average.

Nearly one-third of the State’s expected oat crop was planted during the week, third highest percentage seeded for the 3rd week of April in 20 years. Seventy-four percent of the oat crop has been planted, over 2 weeks ahead of last year, and one week ahead of the average. Some areas are seeing faster planting of corn than others.

Iowa State University extension agronomist Angie Reik-Hinz monitors 9 counties from Hamilton to Cerro Gordo. “Right around Webster City, Fort Dodge, Stanhope, Stratford area, we’re seeing a lot of corn in the ground. Maybe upwards of thirty to forty percent,” Reik-Hinz says. The temperature has kept some parts of the state from keeping up early on. “As we move a little further east, it’s a little bit less corn in the ground, and as we go north it significantly tapers off. It’s been a lot colder and wetter up north.”

Another ISU agronomist, Mark Licht in Ames, has also heard a lot of different results when it comes to planting progress. “Reports of farmers who are either 100-percent done, 50-percent done or maybe, three-four-five percent,” Licht says. He also has found central Iowa saw the most progress. “From where I’m getting my reports, it seems like really the area west of Ames — kind of between Ames and Carroll — was where a lot of the progress was made before the rains finally came on Saturday,” according to Licht”