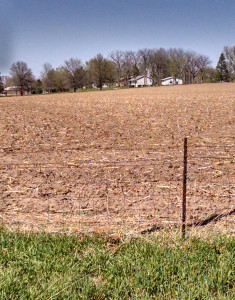 Field waiting to be planted.

Farmers got started planting last week before rains and cooler weather hit heading into this week. Iowa State University extension agronomist, Mark Licht, says he still cautions farmers to keep an eye on the forecast in deciding when to plant to avoid problems.

“Some of this corn that did get planted late last week, there is the potential that there is imbibitional chilling that could affect that stand establishment. So we really want to be careful of that, and just kind of keep an eye on not only what our planting conditions are at the present time, but really what they are going to do in the next three to five to seven days,” Licht says.

He says it’s a condition that hits seeds early on.”Typically we think of imbibitional chilling being more critical or crucial or impacting in the 24 to 48 hours following the planting of the seed,” Licht explains. “Because that’s time the frame where that seed imbibes water and the metabolic processes within the seed start and get us on to the way to that emerging seed.” He says imbibitional chilling can stop the germination process entirely, or impact the seed in the process.

“They may germinate, get some shoots and or root growth and die before they emerge. Or it can just be a slowed growth, a slowed vigor, so it may just take it longer to emerge, which in that case makes it more susceptible to seed pathogens, root pathogens that occur early in the season,” Licht says.

Farmers are anxious to get into the fields as quickly as they can, but Licht says planting early doesn’t always mean farmers will be able to get crops out of the fields earlier in the fall. “Part of it depends on really what our growing season ends up doing on us. A cool season like we had last year, really planting early in some ways helped us because it was just a longer growing season. The crop didn’t mature quite as fast because it was just so much cooler,” Licht says. “We get into a warm growing season, planting early gives it more time in the fall for it to dry down after it matures. So, there is some truth to it.”

The U.S.D.A. crop report from Monday showed seven percent of the corn acreage had already been planted, which was a little ahead of last year, but right about normal for the 5-year average.