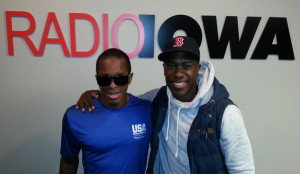 Like many of the athletes competing at the Drake Relays this week David Brown’s goal is to earn a trip to Rio in 2016. The only difference is that he is blind. Brown owns the world record for the visually impaired in the 100 and 200 meter dash and he will compete in the paralympic 200 on Friday night at Drake.

A childhood disease robbed Brown of his sight and he gravitated to track as a teenager. He burst on to the international scene in 2012 when he tried to earn a spot in the paralympics. “I made the team to go to London and I ranked in the top 5 in 100 meters and the top 10 in the 200 meters, had American records at that point in time. And I wasn’t too far off from my major competitors,” Brown says. He says he just had to work a little harder to reach his dream.

Brown says it still blows his mind that he owns two world records but what he really wants is a gold medal at the 2016 paralympics. “Being the world record holder to me is just another title that can be taken away tomorrow,” Brown says. But, he says once you get the gold medal, that can never be taken away.

Brown says when fans watch him run he wants them to know that anything is possible. “I’m somebody that doesn’t have any sight, but yet I am running at lightening speed. And at the same time I am not just out there running for myself, my slogan is ‘Running for his Glory,’ so I am out three representing God, representing the United States and I am representing my family,” Brown says.

Brown competes with the aid of a guide runner. Jerome Avery had an accomplished career of his own and competed in four U.S. Olympic Trials. They two are connected by tether and run in two lanes and Avery can yell out to keep Brown in his lane.

Avery first served as a guide runner in 2004 after coming up short at the Olympic trials and he says a friend told him about the opportunity to work with visually impaired athletes. He says he hit it off with the first person he met and has been doing it ever since that first time.