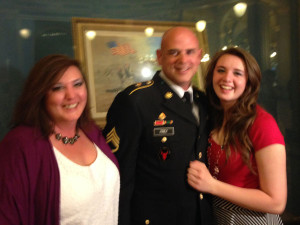 A statehouse ceremony honoring military kids in Iowa turned into an emotional reunion for a northern Iowa teenager and her father, who has been deployed overseas. Iowa National Guard Adjutant General Timothy Orr was in on the secret.

“Turn around please,” Orr said, and that’s when the surprise was sprung, promoting applause from the crowd as father and daughter hugged. “This is Samantha’s father who just returned from Iraq.”

Sixteen-year-old Samantha Frey of Parkersburg is a high school sophomore. Before her dad made his appearance at the event this afternoon, Samantha was invited to read a speech she wrote about seeing her dad off at the airport when he left nine months ago.

General Orr gave Samantha a “commander’s coin” just before he sprung the surprise. A few moments later the family spoke to reporters.

“It’s weird because last night I actually had a dream about like if he were to come and I was upset this morning. I was all like, ‘I’m going to be sad. He’s not going to come home,'” Samantha said. “…I still feel very like this isn’t real. I just feel so blessed. It feels good to have my dad home.”

That statement earned Samantha another kiss on the forehead from Staff Sergeant James Frey. Samantha snuggled into another embrace with her dad, still sniffling about two minutes after their surprise reunion. Samantha’s parents and the Iowa National Guard had been planning this surprise for about a month.

Samantha said today’s reunion was what every military kid dreams about when their mom or dad is away.

“I tortured myself watching a lot of coming home videos and the show ‘Coming Home,'” Samantha said.

Now, Samantha and her father have a coming home video of their own.

“I don’t know if I’ve seen one that could top that,” she told reporters. “…It was awesome.”

Frey, a former Marine, is a full-time member of the Iowa National Guard. This was his fourth deployment.