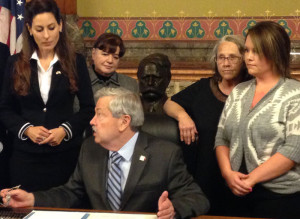 Kerri Kasem, on governor’s left, and Misty Davis, on right at bill signing.

Iowa has passed a groundbreaking law that gives family members a new legal avenue to use if they’re blocked from seeing a relative who is incapacitated.

The law is inspired by the case of Casey Kasem, the legendary radio DJ who was host of “America’s Top 40.” Kerri Kasem, his oldest daughter, was at the Iowa capitol this afternoon (Friday) to watch Governor Branstad sign the bill into law.

“My dad would probably still be alive today if we had this bill in California,” Kasem said.

Casey Kasem, who died last June, suffered from Parkinson’s disease. Kasem’s wife, Jean, refused to let his children from a previous marriage see their father. Jean Kasem moved the radio legend out of a Santa Monica hospital last May and took him to the Seattle area, where he died a month later. Then she took his body first to Montreal, then Oslo, where it sat in a freezer for months until he was buried in an unmarked grave shortly before Christmas.

“This is a silent epidemic. There are so many abuses of guardianships and so many abuses of caretakers,” Kerri Kasem said. “…We have seen thousands of cases of isolation — thousands — and it’s legal. And all of the laws are on the abusers side and there is nothing you can do.”

The new Iowa law would allow relatives in a situation like Kasem’s to ask a judge to enforce visitation rights. Twenty-nine-year-old Misty Davis of Cedar Rapids hasn’t been able to see her step-brother, Jim Davis, who lives in Washington. Her step-mother — as the legal guardian for James — will not let Misty or anyone from her late husband’s family see Jim, who has an intellectual disability.

“I last saw him approximately two months ago,” Davis said today. “I get told by people where he’s at and I’ll show up randomly if it’s a public place and then within five minutes I’m kicked out or threatened with the law.”

The new law that would help Davis seek to enforce visitation rights goes into effect July 1. Until then, Davis has a list of what her stepbrother is missing: “memories, love, attention, respect, family.”

The last time Davis saw her stepbrother for an extended period of time was when they sat next to one another at their father’s funeral in January of 2013.