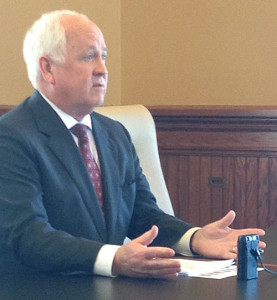 Iowa Lottery officials are monitoring states that are experimenting with the electronic sale of lottery tickets. Iowa Lottery CEO Terry Rich told legislators the state-run lottery will eventually start to lose money if it doesn’t adapt “to player expectations for convenience and use of technology.”

“A mobile device is what most millennials are using now,” Rich said Thursday. “…Only 25 percent of the people use cash when they go into a store.”

Rich testified before the Iowa House Government Oversight Committee. He told the panel an attorney general’s opinion indicates the Iowa Lottery has the authority to conduct “internet gaming.”

“We don’t plan to do that without having discussions with you, working with the other gaming entities,” Rich said. “We need to do it as a gaming policy for the State of Iowa, but with a recent ruling in 2010 or ’11, five states are doing it now pretty heavy including Illinois, Minnesota and Missouri is doing some other types of internet gaming.”

Missouri is testing a “pay at the pump” system that lets customers buy lottery tickets as they buy gas. Illinois and Minnesota now permit lottery tickets to be purchased online.

“Retail stores have not shut down because of it,” Rich told legislators. “…It’s been incremental not exponential in its growth.”