You are here: Home / News / Governor Walker: a national ‘Right to Work’ law a ‘legitimate’ goal 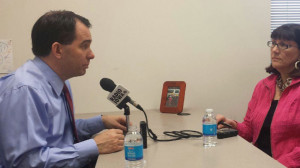 Wisconsin Governor Scott Walker says he has the “courage…and capacity” to take on powerful interests, including unions, at the federal level.

Walker, a Republican who is likely to enter the presidential race soon, signed a “right to work” law in Wisconsin this year and he sees a need for a similar federal law.

“As much as I think the federal government should get out of most of what it’s in right now, I think establishing fundamental freedoms for the American people is a legitimate thing and that would be something that would provide that opportunity in the other half of America to people who don’t have those opportunities today,” Walker said this morning during an interview with Radio Iowa.

Twenty five states, including Iowa and Wisconsin, have “right-to-work” laws that forbid organized labor from forcing non-union workers to pay union dues or fees in a workplace where employees have voted to unionize. Soon after he was elected governor in 2010, Walker gained attention and plaudits from Republicans and business interests across the country by pushing to make changes in tenure and benefits for teachers and public employees in Wisconsin.

“Really what we did wasn’t just fight unions. It was fight the stranglehold that big government special interests had on state and local governments,” Walker said today. “I think in Washington we need that even more.”

The federal government has “grown too much,” according to Walker, and, if elected president, he’d seek changes in the civil service system for federal employees.

“For example, we got rid of seniority and tenure. You can hire and fire based on merit. You can pay based on performance,” Walker said. “We found in our schools and our local and state governments you can put the best and the brightest in those positions.”

Walker and eight other potential competitors for the Republican Party’s 2016 presidential nomination will speak this evening to the Iowa Faith and Freedom Coalition. It’s an organization that represents evangelical Christians, an important voting block in the Iowa GOP. Walker, who is the son of a Baptist minister, said his faith impacts how he conducts himself and how he listens to others.

“My faith is not a litmus test. I don’t get a Ten Commandments handed down to me on a tablet, saying: ‘You should be this on this issue and that on that issue,'” Walker said. “…I’m a Christian. I’m a follower of Jesus Christ. I firmly that someone can be a fellow believer and have different views than I do on policy and I don’t think that makes them any less of a believer if they differ. I just think you get to it in different ways.”

Walker vaulted into the national spotlight in January after a well-received speech at Congressman Steve King’s “Iowa Freedom Summit” in Des Moines. When asked today about his choice to literally roll up his shirt sleeves for that and other key political appearances over the past four months, Walker — whose suit jacket was hanging on the back of the chair in which he was sitting during the Radio Iowa interview — laughed.

“I give a few speeches in a coat,” Walker said, then he offered up the reason why he often goes coatless: “You’ll get the simple truth out of me. It’s usually just because I’m hot.”