You are here: Home / News / Nine Republicans in 2016 field speak in Waukee church 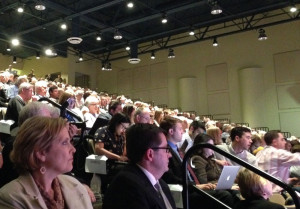 A large crowd was on hand for the Iowa Faith and Freedom Coalition event.

Nine Republicans who will likely compete for the GOP’s 2016 presidential nomination spoke to hundreds of evangelical Christians Saturday evening at a church in Waukee.

The Iowa Faith and Freedom Coalition’s event featured the three U.S. senators who are officially in the race.

Kentucky Senator Rand Paul told the crowd it was time to “push back” and “flip the tables” against Democrats on issues like abortion and he railed against foreign aid to countries that persecute Christians.

Florida Senator Marco Rubio, the youngest candidate in the field, urged the crowd to “embrace” the future.

“It begins by turning the page on these leaders that are trapped in yesterday,” Rubio said.

Texas Senator Ted Cruz is the third senator who’s officially in the race and he accused Democrats of being “radicalized” on the same-sex marriage issue.

“The modern Democratic Party has gotten so extreme, so intolerant, there is a liberal fascism that is dedicated to going after and targeting believing Christians who follow the Biblical teaching on marriage,” Cruz said.

Former Arkansas Governor Mike Huckabee was the victor in Iowa’s 2008 Caucuses and is likely to enter the race next month. He, too, blasted those who accuse Christian conservatives of discrimination if they support bans on same-sex marriage and refuse to do business with same-sex couples.

“It is the criminalization of Christianity. We cannot stand by silently,” Huckabee said, to applause.

Wisconsin Governor Scott Walker, likely to be among the latest to formally enter the race, said the federal courts should not be defining marriage.

“In Wisconsin and other places across the country marriage is defined between one man and one woman and states should be the ones that make that decision,” Walker said, to applause and a few whistles.

Louisiana Governor Bobby Jindal said corporate America should be wary of throwing in with the “radical left” on same-sex marriage.

“I believe in traditional marriage between a man and a woman and unlike President Obama and Secretary Clinton…my views, they’re not evolving with the times. They’re not based on poll numbers,” Jindal said, to applause.

Former Hewlett-Packard CEO Carly Fiorina plans to announce her candidacy next month and she spent the opening and closing moments in her speech to lambaste Hillary Clinton and former President Bill Clinton.

“And I’ll tell you what — when the General Election rolls around we’d better have a nominee that can throw those punches all day long,” Fiorina said, to applause.

Former Texas Governor Rick Perry, who is likely to run a second time for president, talked of Biblical figures like Moses and Paul who had been given second chances by God.

Former Senator Rick Santorum, the winner of the 2012 Iowa Caucuses, argued the GOP’s message needs to change and that’s one reason he has come out in favor of raising the minimum wage.

“We can go out and talk about how we have to bail out Wall Street, that we have to bailout auto companies, but when it comes to providing worker protection for the lowest-wage workers, we have to be Adam Smith. No!” Santorum said. “We need to say that we’re on the side of the American worker.”

The Iowa Faith and Freedom Coalition plans another fundraising event this fall at the Iowa State Faigrounds and that’s likely to draw some of the same candidates.