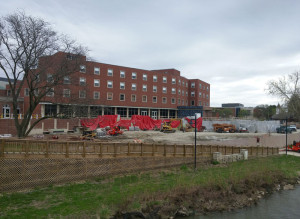 Flood renovation work will soon be completed on the Iowa Memorial Union.

An area that was a key meeting place for University of Iowa students prior to the 2008 floods will soon return to action — marking another big recovery step. U-I vice president, Rod Lenertz, says work on the ground floor of the Iowa Memorial Union will be completed soon on the Iowa City campus.

“We will be finishing the interior ground floor renovations and recovery within the month, and will actually begin to move furniture into the space within the next week with the intent to have the building open to the public ahead of June 1st, which will allow for all of the students coming to orientation during the summer to also enjoy the space,” Lenertz says.

Lenertz says under FEMA regulations they chose to use what’s called an “approved” designation for the repairs, which means they put things back the way they were before the flooding

“It’ll be very much like what it was when we left the building in 2008. Obviously new finishes in the space, and there are code updates that are require — but otherwise, primarily the same,” Lenertz says. If the university had made a lot of changes, the project could have moved to what’s called an “improved” designation and the money to do the work was not guaranteed.

Lenertz says the return of the union bowling alley fell victim to the government restrictions on recovery work. “After the flood, some of our initial investigations had student government leaders and others wondering if we shouldn’t bring that back as an operation for recreation for the students,” Lenertz says. “And we began to study it, but that once again fell into that notion of taking the project from an approved designation to an improved designation.”

The cost to return the space back to its original standing was not cheap. “The project cost for the union is roughly 25 million dollars,a nd that includes the full recovery of the levels of the building that were flood damaged, including all of the building systems that were, as well as the protection of the building,” Lenertz explains. “And in the case of the IMU, the protection is a flood wall, a permanent flood wall constructed around the entire building to a level of two feet above the 500-year flood level.”

One thing that is coming back to the IMU is the student bookstore. “Within the month we will return that to the IMU for the first time since 2008, and that’s just one example. There’s food service, entertainment venues, studying spaces and general gathering spaces that the students enjoyed prior to 2008,” Lenertz says. As the work moves to a close on the building, it also gives U-I officials some peace of mind. “We’re at an interesting point. For the first time since the flood, we are truly more protected as a campus as this spring arrives. The IMU in fact is one of the final recovery projects we have,” Lenertz says.

Lenertz says reopening the ground floor of the union leaves one less box to be checked off on the long list of flood recovery projects. “To see a major student building like the IMU recovered and protected as it will be, is a major milestone,” Lenertz says. “It leaves us primarily with just the replacement projects, with Hancher, with the school of music and the art studios project, Those projects still have construction to be completed and we’ll be finishing those projects in 2016 But you can certainly see the light at the end of the tunnel.”

The IMU was one of 22 buildings that had to have repair work done after the flooding.