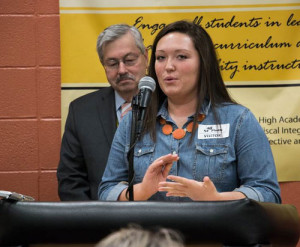 There are nearly 500 teachers in the growing district and nearly one-quarter of them are in some type of leadership role as a model teacher, instructional coach or curriculum leader.

Maddy Sheets, the student council president at Southeast Polk High School, was invited to speak at a news conference after the meeting with the governor.

Madison Fontana is nearing the end of her second year as as a second grade teacher.

“We’re collaborating with the model teachers. The instructional coaches are always coming into our classrooms,” Fontana said. “There’s just more support this year for all roles in the building.”

Southeast Polk was among the 39 Iowa school districts that got additional state support for the teacher improvement program last year. to set up teacher coaching systems for this school year. Joe Horton, the associate superintendent at Southeast Polk, said there’s been a surge in professional development for teachers and an improvement in student performance.

“All of a sudden we had more cooks in the kitchen,” Horton said. “We had a lot more people involved.”

“We’ve seen a lot of enthusiasm,” Branstad said. “We see tremendous collaboration, use of data to effectively improve instruction.”

Southeast Polk Superintendent Craig Menozzi said his district got an additioanl $2.2 million for the teacher improvement program and he hired 20 new teachers, to compensate for designating some teachers are coaches who travel from classroom to classroom.

Given the uncertainty about the level of general state aid, however, Menozzi is planning a series of budget cuts for next year. While he’s not planning to issue pink slips, he would cut the instructional supply budget by 10 percent and cancel orders for new math books, new language arts materials and new textbooks for social studies classes. Those budget cuts would be necessary if the level of state aid recommended by Governor Branstad and House Republicans is adopted for the school year that starts this fall. Democrats in the Senate have an offer of a two-and-five-eighths percent increase in general state support and the superintendent says he wouldn’t have to make budget cuts at that level.